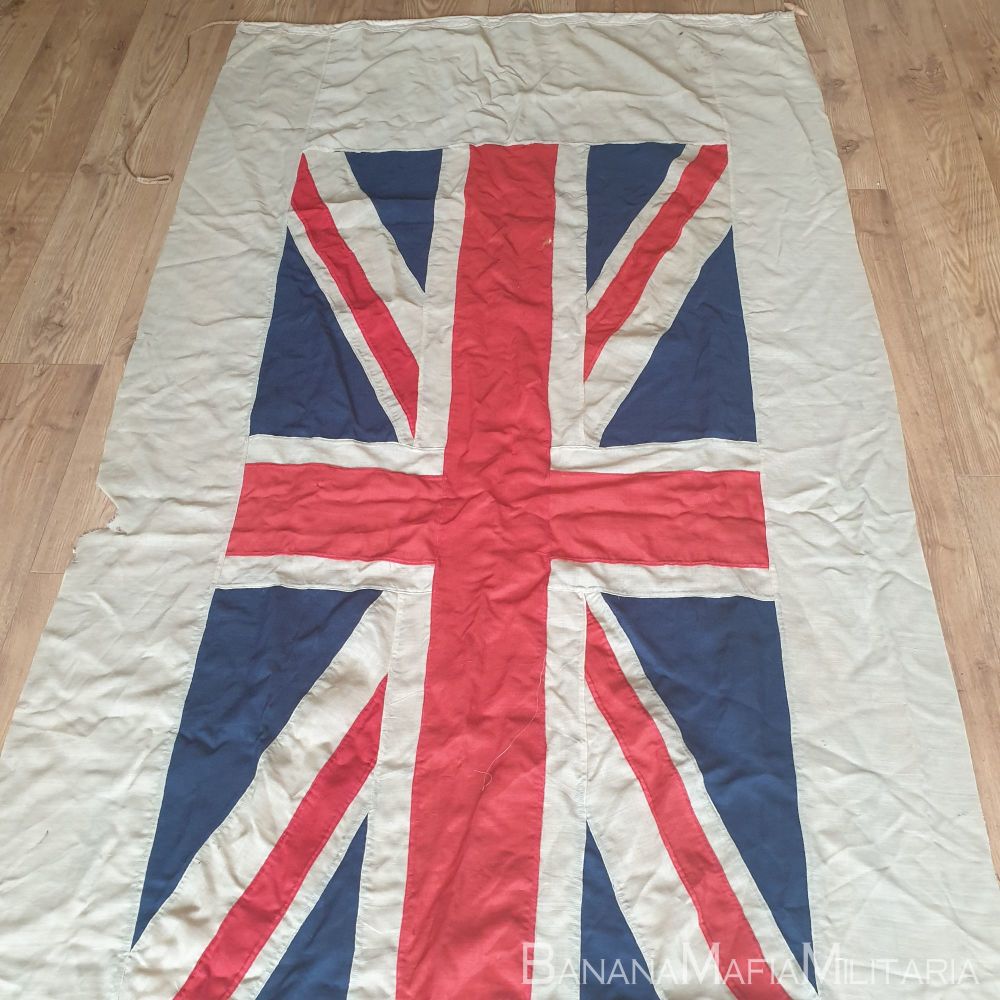 Type, construction, and material production technique (fault lines) point this flag to have been produced between 1900 and 1930

Some wear and use marks and period repairs as to be expected with age, giving a lovely look to this flag.

Development of the Pilot Jack

The Ship Owners of London opposed this and asked the Admiralty to end restrictions on the use of the Union Jack. It was a necessary part of Marryat's Code, which was about to be adopted by the French and Americans. The Admiralty replied that the use of the Union Jack as the signal for a pilot had been admitted, and the indulgence had led to its indiscriminate use. They were prepared to allow its continued use as a pilot signal for British ships, but felt it would be highly inconvenient if the Union Jack were to become part of a general code, particularly if the code were to be introduced into the French and American Navies. Their Lordships could see no reason why a different flag should not be substituted for the Union Jack.

The Ship Owners asked Captain Marryat to resolve the problem. He thought that the best plan was to take advantage of the fact that all British ships, whether men- of-war or merchant vessels, carried the Red Ensign, which had the Union Jack in one corner. He thought that if a Red Ensign was trimmed to leave just the Union with a red edge at the bottom and fly, the alteration would not be great enough to cause confusion, but would be sufficient to satisfy Their Lordships. It did not. It was pointed out that the suggestion did not limit the size of the margin, which might be so small as to be indistinguishable, and it was suggested that a flag of yellow and blue, or any other distinct colours, could replace the Union Jack. The Ship Owners proposed a Union Jack with a six inch red border on all sides. They thought this would be cheaper than introducing a new flag, as every ship already had a Union Jack. They also suggested that in the proposed Regulations relating to Pilotage the same flag should be specified as the signal for a pilot. Their Lordships agreed to this, but the border was to be white instead of red, and the size of the border was to be a proportion of the size of the flag.

The new flag was warranted on 8 July 1823, the details published in the London Gazette on the 9th, to be effective 1 January 1824. The change was included in the fourth edition of Marryat's Code published in 1826. The same white-bordered Union Jack was adopted by the Royal Navy as 'the Pilot Signal in all parts of the world' on 5 December 1826.