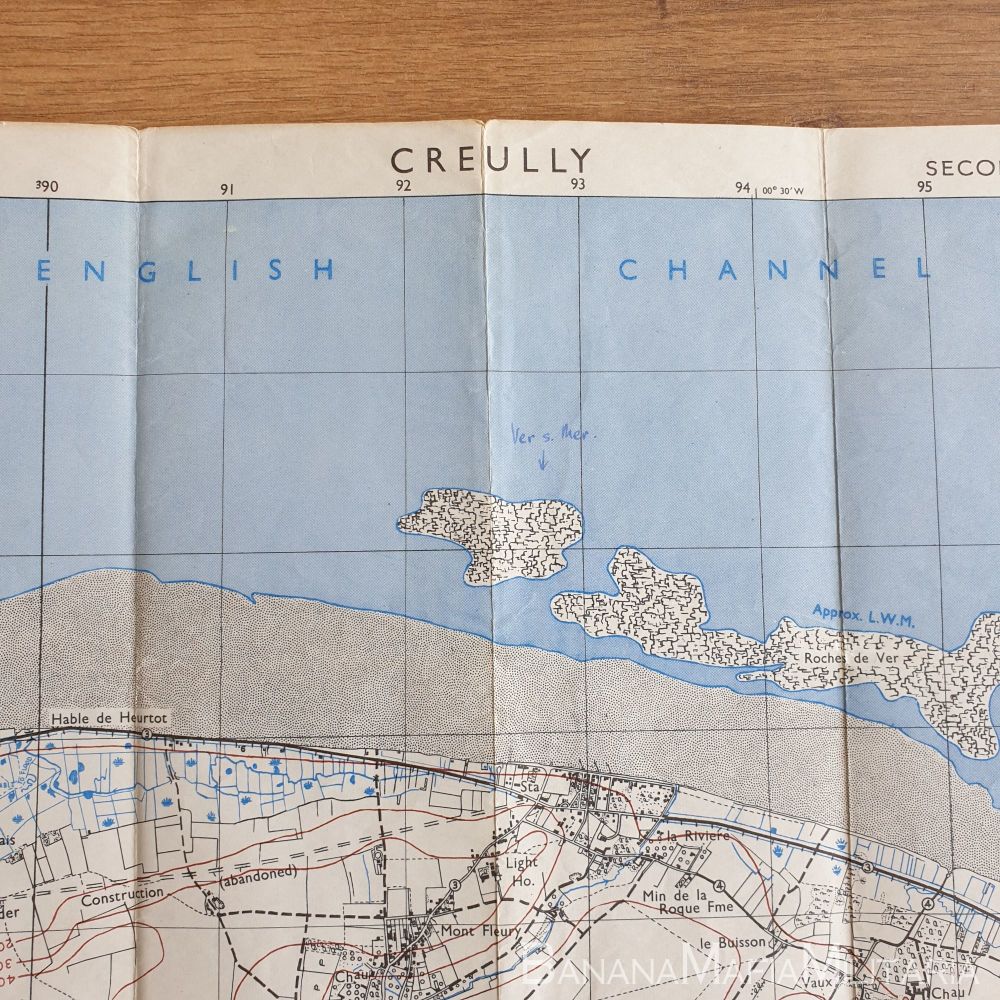 some wear, marks, folds and foxing expected with age and use.

In the spring of 1944, the town of Creully housed the command post of the Schwere-Artillerie-Abteilung 989 (716. Infanterie-Division) third battery, armed with four 122 mm sFH 396 howitzers of Russian origin.

In the early afternoon of June 6, 1944, the Canadians of Company D of the Royal Winnipeg Rifles (7th Infantry Brigade, 3rd Infantry Division) advanced towards the village of Creully. They are supported by three Sherman tanks belonging to the 2nd platoon of 1st Hussars C Squadron (2nd Armored Brigade) and commanded by Lieutenant W. F. “Bill” McCormick. When company D, commanded by Major Lochie R. Fulton, descended the terrain immediately outside the village, opposite the castle of Creully, Lieutenant Jack Mitchell was in charge of securing the bridge which crossed the Seulles. As he crosses the bridge, a German machine gun opens fire, kills two soldiers and touches Mitchell in his hand. Although wounded and exposed to enemy fire, he signaled to Lieutenant McCormick’s tanks to approach while throwing anti-tank mines into the river: the Shermans came forward and supported the infantry by fire. Becoming the targets of the Germans, the tanks maneuvered near the bridge and managed to neutralize the opposing position.

McCormick continues to advance to the entrance of the village, facing the church and finding an ideal position for a precision shooter. The lieutenant ordered the firing of several shells of 75 mm in the direction of the belfry. A German 20-mm gun opens fire on the lieutenant’s tank, which immediately retaliates and destroys it. Company D then secures Creully, which is under control. A few minutes later, the British 6th Battalion Green Howards Regiment (69th Infantry Brigade, 50th Infantry Division) and the 4th / 7th Dragoons Guard (8th Armored Brigade) crossed the town and secured it. The Canadians then headed for the village of Lantheuil.

Once Creully was released, a British Broadcasting Corporation (BBC) radio transmitter was installed in the Creullet castle, located to the northwest of the village. Messages to follow the evolution of the fighting were broadcast until 21 July 1944. From 7 to 22 June 1944, General Montgomery set up his tactical headquarters in the Creullet castle. He received Winston Churchill on June 12, De Gaulle on June 14, Eisenhower on June 15 and King George VI on June 16.